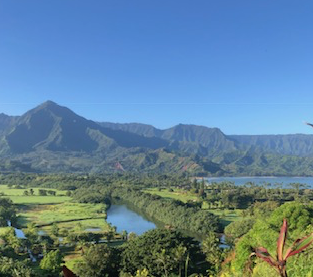 My week in Hawaii was a good one for BPL. I had loads of meetings about the development of our charter school on Kauai that has a major part of the school focusing on Hawaiian culture, language and being in the world in ways that are environmentally sustainable. The people I met there were wonderful. This BPL school on the Northshore of Kauai will be dealing with issues around what are the new economies that emanate from old and new ways of knowing, reducing the brain drain through these skillsets, and through affordable housing which is the primary reason why people born on Kauai are leaving Kauai. As many of you know, I “stumbled” on this work while visiting there and meeting a group starting a charter school. On Tuesday, I went over to Oahu and meet with staff from the Windward School District. We are developing a contract there around a BPL school and the development of a district-wide internship program with ImBlaze and Harbor Freight Fellows. Attending the meeting was also someone from the Castle Foundation who seemed interested in having us do what we did in Philadelphia, start a BPL non-profit there. More to come on all of this.

“Sometimes before we even have language, we have images, we have things that are visual. And so, holding space with art materials gives people an opportunity to process, so that by end of it they do have words, and they have a greater understanding of it.” Sara Corbett

This is article brings into focus the notion of different ways of knowing. It has been part of what we have done at BPL in our schools, retreats and conferences for decades. Both the cultural and scientific aspects hold water yet, the struggle for academic institutions and schools to accept crafts and trades as a highly valued form of cognition leave students, staff and program in the lurch. It was good to find this article about craftivism.

If you haven’t read the President of the Hewlett Foundation, Larry Kramer’s essay – Listening to People Who Think We Are Wrong please, take the time to do so this weekend. https://mailchi.mp/hewlett/awlpe1272g-2546713?e=b321cb0cea. I’m so glad to see a foundation president step up and challenge the status quo of his own organization, other foundations, college presidents, think tanks, politicians and all of us. A week ago, I wrote something similar about holding onto more than one narrative. For years, some of us in BPL have been talking about a more inclusive definition of empathy to mean being empathetic to people who are more difficult to be empathetic towards. Larry puts out ways to work on our empathy in more constructive albeit more difficult situations. A big thanks goes out to him for writing this essay.

I think it was either George Carlin or Lenny Bruce who stated something like: The eagle has a left wing and a right wing and if they don’t flap together the eagle falls on his ass. Personally, this sums up Larry’s essay for me.

In the New York Times obituary section there was a story on Bernice “Bunny” Sandler, The “Godmother of Title IX”, dies at 90. https://www.nytimes.com/2019/01/08/obituaries/bernice-sandler-dead.html. When I read about her early life, I saw she was from Brooklyn and then, I do what I always do, I Google where she went to high school. Turns out, I was on the money. She did go to Erasmus. Why this is all so fascinating is because Erasmus was a neighborhood school. Our school of 5,000 plus students drew from two congressional districts that when I was there were represented by Shirley Chisholm and Liz Holtzman. To give you a small sample of who was in my graduating class there is Stephanie Mills – The Wiz, Donny Most – Happy Days and Cheryl Toussaint – Olympic Silver and Bronze medalist. But, the even bigger kicker about Bernice Sandler was, I noticed that Bernice also went to the University of Maryland so, I emailed my friend Bill Sedlacek who is Emeritus from there. As most of you know his research was on who graduated college on time across race, class and gender. This was in the late 1960’s early 1970’s, way ahead of almost anyone doing anything about on time graduation around issues of race, class and gender. Here is Bill’s response: “El- I did know Bunny as she was called- she was actually a student of mine - had her in a class & was on her dissertation committee-She was exceptional in many ways.” Today, I spoke with Bill about Bernice. When I asked why so many don’t know of her, he told me people don’t really know her because she did not write that much. She spent most of her time doing. She was an activist.

I’m not sure what all of this means about how someone I never knew and who hardly any of us know, who had a tremendous influence on all of us in American Public Education, comes into my life through her death and then, I find out my life is connected to hers in so many ways.

This happened on the day my son passed away two years ago. That’s what got me to the obituary section. I’m not sure about any of the rest.

This Sunday, I’m off to China to give a keynote to an organization that is interested in working with us there and is taking a good hard look at ImBlaze. This is a short trip. I will be back on Thursday evening. Then, I will be at the San Diego Met with Charlie Plant.