From El – Are you with me now? AJ Ryder

The week before I got to Winnipeg, three of our students met with President Obama while he was there. I asked two of the students, Corrina and Armaandeep what it was like to meet him and what did they talk about. Both had amazing experiences that were memorable and eventful. When Armaandeep introduced me at the kick-off of one of this week’s events, he told me that President Obama whispered to him, “We will meet again, I’m sure of it.” What a message! 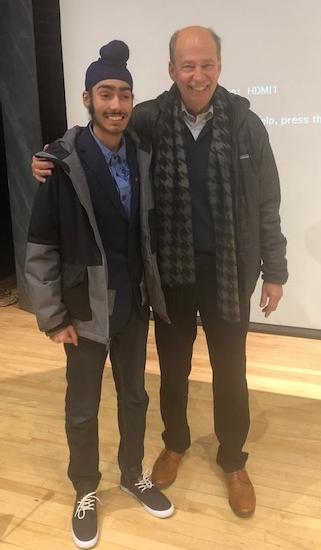 Something happened in Winnipeg over the last three days that we never experienced before. The students and staff from the two BPL schools were the leaders/facilitators of an all-day district-wide conference - Camp Curiosity. The entire staff from all the high schools in the division were in advisories and workshops that were developed mostly by our students and our staff. We’ve had BPL conferences run with this format and we’ve had BPL staff run conferences for organizations with a similar format but we never had a district take the initiative to develop the entire conference around BPL practices delivered mostly by students. The day before the conference, I sat in on the planning of one of the student-run workshops and the thoughtfulness around the choice of topics, the timing and the participants was just amazing. It goes without saying that this was an opportunity to move a district’s practice and deserves loads of recognition from all of us.

Just a couple of many highlights:

Before Camp Curiosity, I spent two days with staff and students at both Seven Oaks Met and Maples Met. Part of that time was in celebration of the 10-year anniversary of Seven Oaks Met - SOMet. Both Nancy and David have been there the entire 10 years, Nancy being the principal for the last four. I remember them in their first advisories. It was a great celebration with students, staff, alumni, board members, and families showing up to honor all that has been accomplished. Once again, the entire event was run by students.

Both of these schools have been recognized by the Canadian government for their innovation and accomplishments.

This year at Big Bang in Detroit, Winnipeg students and staff will be ready and well-represented. It was an amazing three days.

One of the many good things about Canadian education is their vocational system. It has always been the case there that only about 40% of students go on to four-year universities. Most of the rest of the students pursue post-secondary in technical schools. I met quite a few teachers and administrators from these programs but next time I’m up that way, I want to spend more time to look around at what they are doing that can influence Harbor Freight Fellows and the elevation of the trades.

God Bless the Child That’s Got His Own – Billie Holiday

Them that’s got shall get.

Them that’s not shall lose.

So, the Bible says

And it still is news….

The scandal this week around college admissions in one sense is really not news. We have been talking about legacy admissions and the gaming of the testing system for admission by wealthy families for decades. But, the difference here is that the prosecutors found outright criminal grounds for these practices. Truth is, getting an edge on getting admitted to a university is a multi-million-dollar industry that stacks the deck even more for the wealthy. If the universities just stopped their legacy admissions policies that are around 38% of admissions, it would mean that 38% of students admitted would be different students. Now consider if, they also changed the standards for admissions by eliminating standardized tests so, you couldn’t game the system by getting highly paid coaching for the test and instead created criteria that you can’t cheat on like the non-cognitive dimensions, creativity and diversity. What would that do for who gets admitted? This is whole system is madness. We have got to develop a set of standards around how you are smart that can’t be gamed by wealth or just who you know.

“She Invented a Board Game With Scientific Integrity. It’s Taking Off.
How Elizabeth Hargrave turned a passion for ornithology and spreadsheets into a popular game about birds.”

Last week in the NY Times, there was a story about a new board game that is making waves in the game world. Elizabeth Hargrave, the games’ inventor had a passion for birds. This game approaches what I have been talking about re: the deeper learning of games and how schools can learn from gamers. Her game involves using and learning math, biology and history. In developing the game, she also focused ludology – the study of play and narratology, the study of player story lines and experiences. Hargraves also used ideas from Marc LeBlanc’s book, Eight Kinds of Fun. Some of the elements outlined by LeBLanc are similar to the ones I mentioned last week. Here are a few - , sensation, challenge, fellowship, narrative, fantasy, expression and discovery. There’s really a great deal here for us to start thinking about in terms of understanding student engagement and learning.